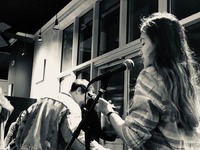 Vivian Isabel is a secondary English teacher, writer, and actress.

As a writer, she presents themes of feminism, cultural appreciation, and love in both spoken and written forms. Coming from the richness and mystique of Cambodian culture, she strives to bring attention to Asian-American writers and artists. Written accomplishments include being published in seven volumes of various literary magazines as well as an anthology about Asian-American experiences.

As an actress, she values working both on and off stage. Concepts that stray from the ordinary, movement-heavy performances, and intimate stage-audience settings are her favorite elements to work with. Theatre experience includes over six years of acting, four years of dance (various), three years of technical theatre, and stage combat. She has had the honor of working with many renowned Shakespearean scholars and directors, as well as performing on the internationally-acclaimed Blackfriar's Playhouse Stage at the American Shakespeare Center.